The pope, in his new book, apparently asserts that the Jews didn’t kill Jesus. So what? Who cares anymore? Are we really going to let the pope decide our opinion on such matters as, Are Jews intrinsically evil? That sounds pretty ridiculous today, but for centuries the pope’s opinion on such matters really mattered. Thankfully, his words are now grist for the mill of Twitter jokes. Here’s my attempt at an elegant controbattuta: 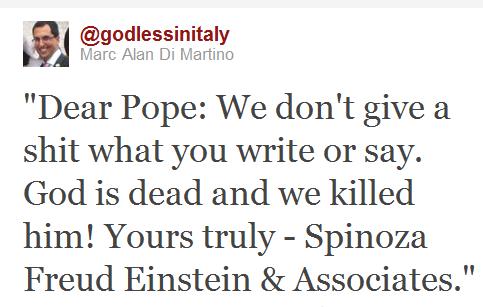 2 thoughts on “Dear Pope: God is dead, and we killed him”