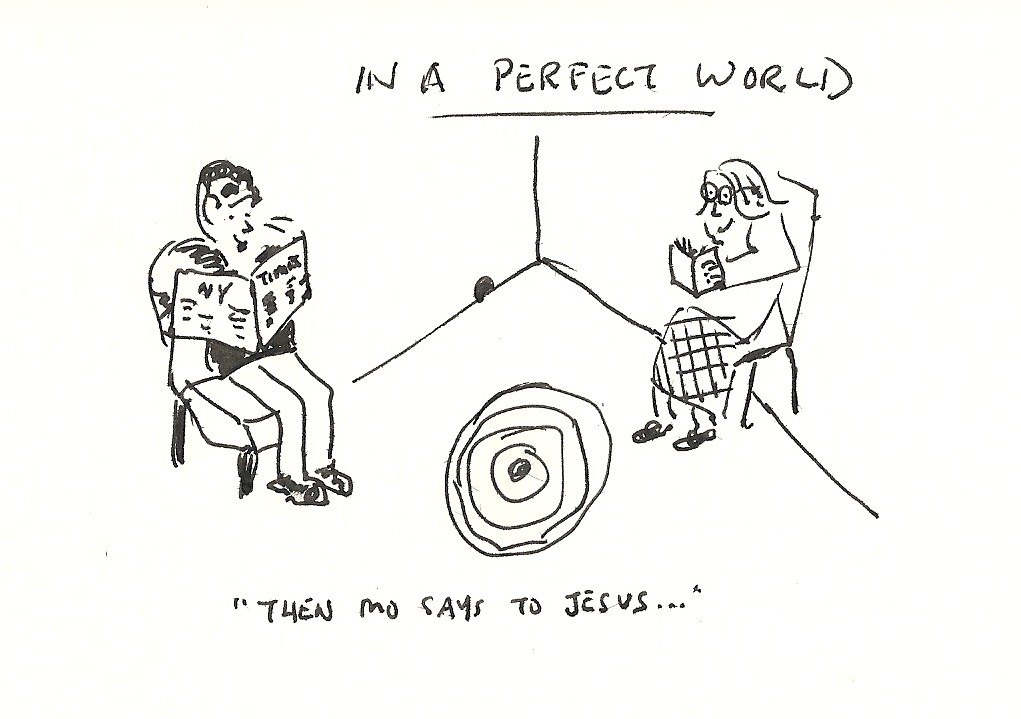 This comic is now up at Jesus and Mo, on the Guest Comics page. Scroll down to see it. It’s a really wonderful thing for a modest little blog like mine to get linked by such an illustrious duo. (By the way, they’re kicking ass over at the Washington Post, leading the pack as the best webcomic.)

I don’t think many of you will have difficulty with the meaning of this one, either. Nudge, nudge; wink, wink.

I’m taking the leap and expanding my blog empire to include cartoons. Here is the first installment of a really badly drawn cartoon I’ll call “In a Perfect World.” A nice, original title subject to change at any time. Feel free to share these cartoons on your blog or website: just please include a link back to this blog. Thanks.

The New Humanist has a bunch of recent posts featuring the cartoons of Martin Rowson. Rowson, whose cartoons I’d never seen until now (well, maybe I had but I just don’t know), takes religion – and atheism – for his subject matter. Here is an apparently controversial cartoon depicting a ginger, prancing Dawkins and a grim, rotund Hitchens at a “coming out” parade. The point, as I take it, is that even atheists can be touchy about how their mascots are treated. Richard Dawkins-as-Muhammad. Though I doubt many death threats or protests will erupt over this one. Because that’s just not what we’re about. But if you happen upon any reports that the New Humanist offices have been bombed by Hitchens’ acolytes, or that the Hitch himself has called for this image’s removal in the name of decency and respect, please forward me the link. In all seriousness.